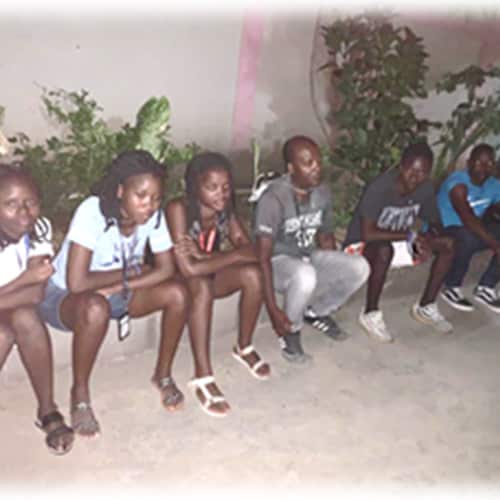 One week after the 7.2 magnitude earthquake hit “the Big South” – southwestern part of Haiti, Jean Louis dispatched a team of eight ambassadors to Les Cayes, including five resident students. They took the campus transport van and loaded it full of supplies. While there, they distributed rice, beans, clothing, small toys and lots of smiles and goodwill! Jonel, our boy’s campus director, spoke with authorities to bolster awareness of the orphanage and offered condolences to the many individuals who had lost homes and family.

As the ambassadors arrived back in Hinche on Monday, Jean Louis said, “We didn’t really help that many, but did what we could.” You could hear the sadness in his voice as there are so many still waiting for help. I asked, “Do you know the story about the starfish?” He didn’t – and I’ll share it with him on our weekly call. “Well,” I said, “for those you helped, you have made a difference. However small it may seem, it is still something. And something is better than nothing.” He agreed. This is truly an amazing story. We constantly hear about aid coming from outside Haiti, but rarely do we hear about aid being dispatched from within. The MFO Ambassador trip to the earthquake-ravaged “Big South” was incredible – sharing something with those who lost everything – simply put: compassion for the fellow man.

We are so proud of our MFO team. Their pilgrimage of goodwill and compassion is one of many core values our resident students are learning…servant’s hearts are shining!!! AND it’s going to happen again! We are planning a second Ambassador Pilgrimage to Les Cayes on September 4. Trip #2 will have more impact as we will be renting a truck, police escort, and filling the truck with staple supplies to help those living in temporary tent cities. Follows is cost of supplies – and we will need LOTS of these supplies! Stock will be purchased in Hinche and Port au Prince:

We need your immediate help! In order to fill the truck, provide transportation and man-power to get items into the hands of those impacted by the earthquake,

The excess fund raised will go towards the Maison Fortune Orphanage mission.